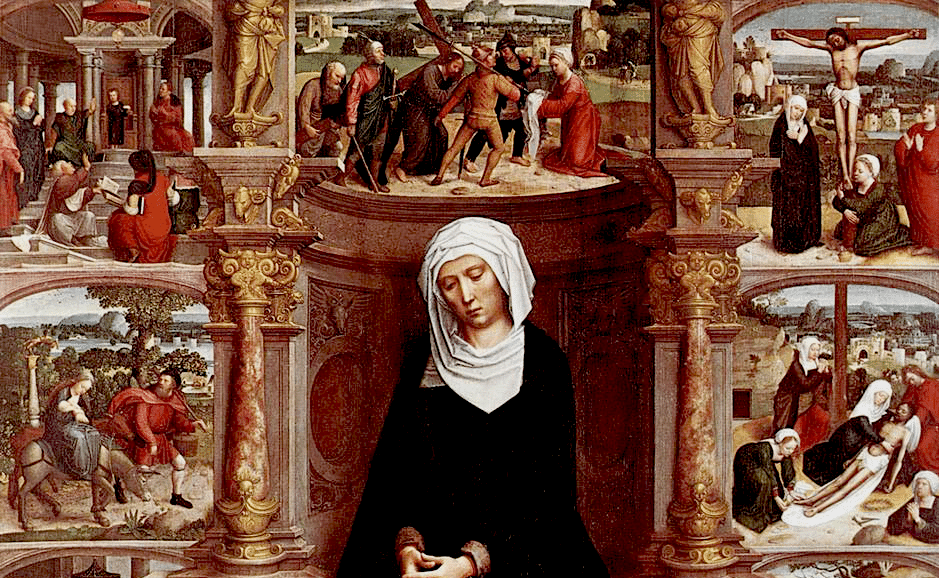 What are the 7 Sorrows of Mary?

The Devotion of the 7 Sorrows of Mary is one of the most popular ways to connect with Mary. She never sinned, yet experienced incredible sufferings just as we do. Christ was not the only one to suffer during the Passion.

1. The Prophecy of Simeon

Mary and Joseph bring Jesus to the temple 40 days after His birth. Jewish custom states both that Mary had to be ritually purified (Leviticus 12) and that Jesus the firstborn should be redeemed (Exodus 13:13).

A happy day for Mary took a turn for the sorrowful when Simeon, a devout man filled with the Holy Spirit (Luke 2:25), encountered Jesus. Simeon had been told that he would not die without seeing “the Lord’s Christ” (Luke 2:26).

After predicting Christ’s redemption of the entire world, Simeon continues:

“And Simeon blessed them and said to Mary his mother, ‘Behold, this child is appointed for the fall and rising of many in Israel, and for a sign that is opposed (and a sword will pierce through your own soul also), so that thoughts from many hearts may be revealed.'” Luke 2:34-35

2. The Flight into Egypt

Herod the Great learned that a child called “the King of the Jews” was threatening his throne (Matthew 2:1-8) and decided to kill all male infants ages 2 or below in the region of Bethlehem (Matthew 2:16). But, Joseph was warned:

After trying to settle down, Mary must deal with traveling many miles to save Jesus.

3. The Loss of the Child Jesus in the Temple

Mary, Joseph, and 12 year old Jesus made a pilgrimage to Jerusalem with their relatives to celebrate Passover. After they were finished, everyone headed back home—everyone except Jesus, who lingered in the Temple.

After a day of travel, Mary and Joseph realized that Jesus was not with their relatives. Frantically, they headed back. After three days, they found him.

4. The Meeting of Jesus and Mary on the Way of the Cross

According to Tradition, Mary encountered Jesus as He carried His cross. Here began Mary’s deepest of sufferings, seeing her only Son being tortured. When Mary said “yes” to bringing Jesus into the world, she took on both the joys and the pains that came with it.

Mary witnessed Jesus nailed to the cross, suffering for hours. Despite all of her indescribable pain, she trusted God. Mary truly knows what it is like to suffer. She is the perfect example of believing in God’s plan even when things look hopeless.


6. Jesus Is Taken Down From the Cross

After Jesus was brought down, Mary could only continue to be in agony at the sight of her dead Son’s body. All who were present joined in her sorrow.

7. The Burial of Jesus

Jesus was placed in His tomb by Joseph of Arimathea, according to the Jewish custom of not allowing a dead body to be left exposed overnight. Mary would continue to suffer.