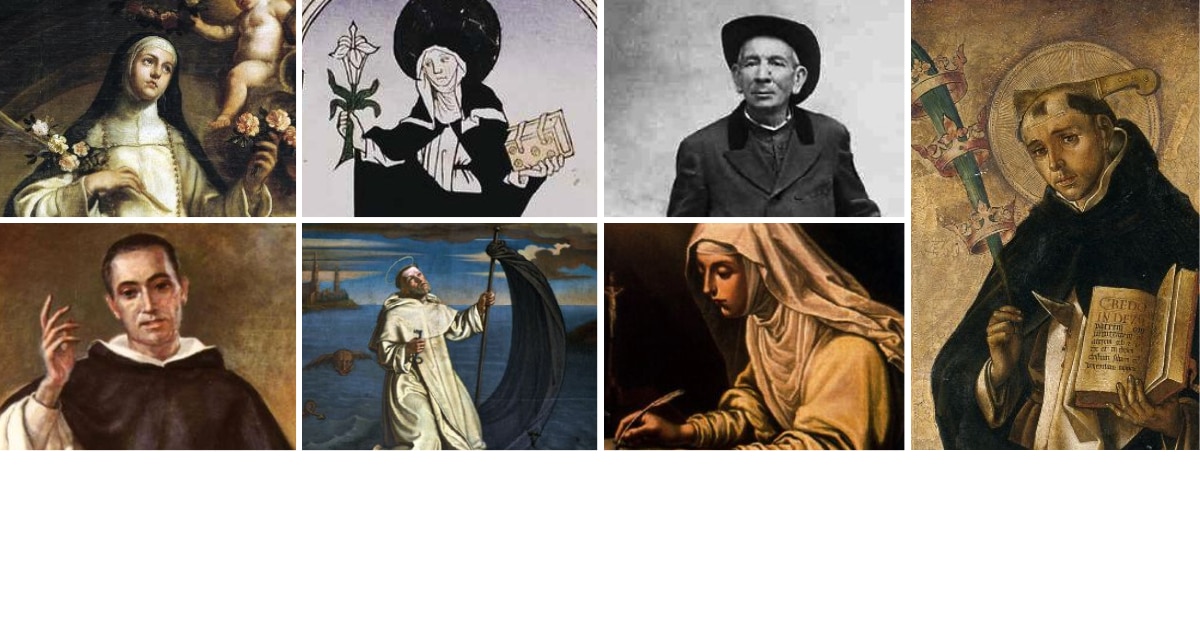 Dominican saints lead the faithful to Christ through their holiness and preaching. Here is a comprehensive list of all the Dominican saints, in chronological order.

After joining the Canons Regular, St. Dominic felt a call evangelize and teach. He felt called to found the Order of Preachers, or the Dominicans. This new group allowed for more flexibility than either monks or secular priests. For centuries, the Dominicans have evangelized and preached all across the world. More Info

St. Raymond was born of noble descent with ties to the Aragon family. He studied in Barcelona and Bologna, earning a doctorate in both civil and canon law. While teaching canon law in Bologna, he joined the Dominican Order at the age of 47. He even served as the Master of the Dominicans from 1238-1240.

Pope Gregory IX asked for St. Raymond’s help in organizing the Church’s laws. He compiled the “Decretals of Gregory IX” which were used for almost 700 years until canon law was fully codified in 1917. St. Raymond is fittingly the patron saint of canon lawyers. More Info

St. Hyacinth was a Polish Dominican priest and missionary. One of his miracles happened when the Mongols attacked his friary. He rushed to the tabernacle to save the Eucharist when he heard Mary ask to be taken away, too. So, he grabbed saved both the Eucharist and a heavy statue of Mary with miraculous ease. He joined the Dominicans after watching St. Dominic perform a miracle in Rome. He received the Dominican habit from St. Dominic himself and was known as the “Apostle of the North.” More Info

St. Albert was a German Dominican friar and bishop. Even during his lifetime, he was known as one of the top theologians and philosophers in the world. Today, he is a Doctor of the Church. His areas of study also included logic, botany, zoology, geography, and astronomy. More Info

Also known as St. Peter Martyr, St. Peter met St. Dominic when he was 15. He joined his new Dominican Order and became a famous preacher throughout all of Italy.

His preaching led to many conversions in Italy, especially those who believed in the Cathar heresy. In response, Cathars from Milan conspired to assassinate St. Peter.

The assassin, Carino of Balsamo, struck St. Peter in the head with an axe. He rose to his knees, recited the first part of the Apostle’s Creed, and wrote “I believe in God” on the ground in his own blood.

Carino would go on to repent and join the Dominicans himself, becoming a blessed. More Info

St. Zdislava grew up as a pious child. When she was 7, she tried to run away to a life of prayer and penance as a hermit in the woods. At 15, she was forced to marry. Her husband treated her harshly. She managed to secure enough freedom to pray and serve the poor.

She also helped to support and build different hospitals, churches, and convents. Her husband even allowed her to join the Third Order of St. Dominic as a layperson. St. Zdislava experienced visions and ecstasies and even performed miracles for those around her. More Info

St. Thomas is one of the most important theologians in Church history. His writings on philosophy, theology, and the law still influence us today. His most famous work is the Summa Theologiae which is a summary of all the major teachings in the Catholic Church. More Info

St. Margaret was the daughter of King Béla IV of Hungary and Maria Laskarina. She was also the younger sister of St. Kinga of Poland and Bl. Yolanda of Poland and the nice of St. Elizabeth of Hungary.

Her parents dedicated her to a Dominican convent in Veszprém, Hungary for her teaching. Later, she went to Buda, Hungary where she received the Dominican habit.

St. Margaret dedicated herself to a life of prayer and penance, constantly choosing the most menial tasks in the convent. More Info

St. Agnes was a Dominican prioress in the Tuscany area of Italy. At the young age of 9, she entered a Franciscan monastery. She continued to grow in holiness and prayer and was elected abbess of her community at the age of 20.

She became known for performing miracles and healing the sick. There was even a report that she multiplied loaves. Despite her healings, she was often sick herself.

In 1301, she returned home to Montepulciano’s community. She had a vision of St. Dominic and decided to have her nuns join the Dominican Order. More Info

St. Catherine was both a mystic and a reformer. She was born in Siena, Italy in 1347 and wanted to devote herself to God, against the wishes of her parents. She became a Third Order Dominican, dedicated to prayer while remaining active in the world.

She was famous for her mysticism and played an important role in reforming the Church. She helped influence Pope Gregory XI to return to Rome from Avignon, France. After his move, the pope encouraged her to complete many missions for him.

Today, her spiritual writings The Dialogue of Divine Providence teach us about our relationship with God. She is the patron saint of Rome, Italy, and Europe. More Info

St. Vincent preached and converted for over 20 years in Europe. He contributed to the resolution of the Western Schism, where 3 separate men claimed to be Pope. The division in the Church even led him to physical sickness. Due to his fiery preaching, his nickname is “The Angel of the Last Judgment.” More Info

St. Antoninus grew up in Florence to a wealth family and joined the Dominicans at the age of 16. He joined Bl. John Dominici’s community which promoted a more strict reform of the order. He reformed Dominican communities throughout Italy and even participated in the Council of Florence in 1439.

As word spread about St. Antoninus, Pope Eugene IV appointed him as Archbishop of Florence. Just as he worked for his order before, he worked for his new archdiocese. He built up his communities, spread the Gospel, taught the laity, and served the poor. More Info

Pope St. Pius V was an important reformer during the Protestant Reformation. He helped implement the reforms of the Council of Trent and standardized the Roman Rite. While dealing with issues in Europe, he helped unite monarchs to defend against the invading Ottomans. More Info

Born in Porturgal, St. Bartholomew entered the Dominican Order at the age of 13. He taught throughout Porturgal, especially in various Dominican houses.

He reluctantly accepted becoming the Archbishop of Braga, Portugal in 1558. He attended and contributed to the Council of Trent, collaborating with St. Charles Borromeo.

Once he returned home, he committed himself to implementing the reforms, all while caring for the poor and building hospitals. More Info

St. Martin was a Peruvian lay brother of the Dominicans in Lima, at the same time as St. Rose of Lima. He dedicated himself to serving the poor. His works included founding an orphanage and a children’s hospital. His miracles include levitation, bilocation, and miraculous healings. More Info

St. Rose of Lima was a Third Order Dominican, dedicated to a life of penance and prayer. She also spent much of her time helping the poor in Lima. She even built a small hut for herself to pray in, leaving when it was time to go to church. More Info

A Third Order Dominican, St. Louis was a renowned founder and preacher. He founded both the Company of Mary and the Daughters of Wisdom. His most famous works are Secret of the Rosary and True Devotion to Mary. Pope Clement XI even left him with the title of “Apostolic Missionary.” More Info