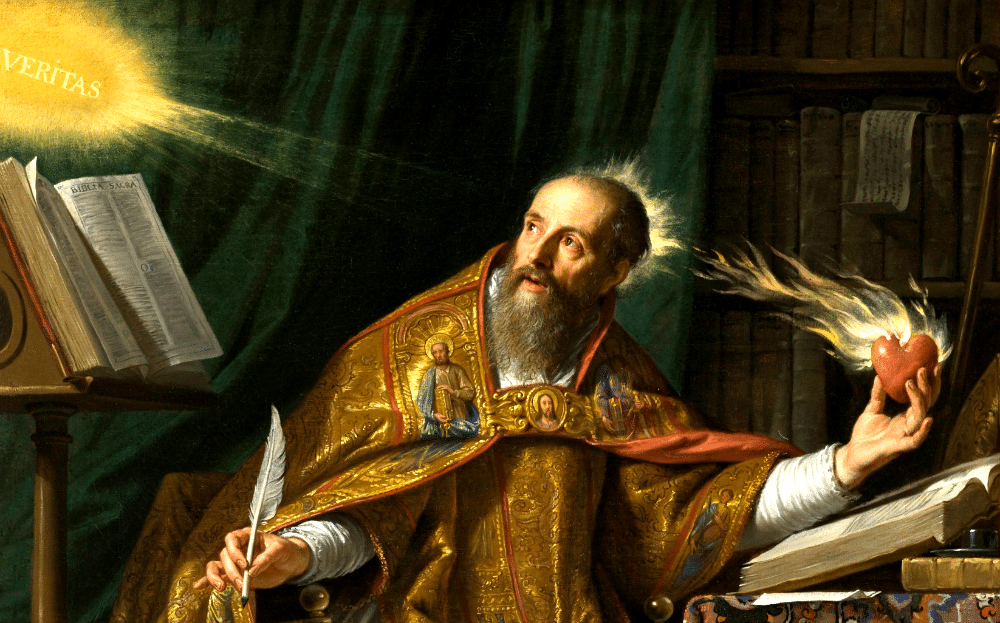 1643 years ago, a poor North African farm boy left his hometown for the big city to study rhetoric and chase women. Like many college students, he lived a rather reckless life and had a knack for doing things that wouldn’t impress his mother, like fathering an illegitimate son and joining a weird religious sect called Manichaeism.

Fast forward 58 years. Our hero is now lying on his deathbed in Hippo Regius, Roman North Africa, a city currently under siege by the Vandals. Except now, he’s a Catholic bishop and the biggest theologian and philosopher of his time, an intellectual giant who wrote more books than you could possibly have time to read.

Obviously, a lot happened during those 58 years. As a twenty-something, Augustine moved to Rome and then Milan to teach. Through his reading, his friendship with the local bishop, and the urging of his friends, he came closer and closer to the Catholic Church. In a garden in Milan, his conversion experience reached its climax, and he at last committed himself fully to Christ.

Augustine then got baptized, quit his day job as a rhetoric teacher, and began his journey to become one of the greatest saints of all time.Here’s a short list of things you may not have known about this guy:

I’m guessing this one might have some connection to his crazy college years. Regardless, next time you get out the old fermenting bucket, send out a quick prayer request to St. Augustine and see if he can convince God to help with your brew.

2. He worked to end the slave trade in the Roman Empire. 2

Though his efforts were unsuccessful, St. Augustine encouraged Christians to free their slaves and even wrote to the emperor, encouraging him to pass laws against the slave trade.

3. He lived a life surrounded by saints.

His mother was St. Monica. He was baptized by St. Ambrose of Milan. As a bishop, he kept up a correspondence with St. Jerome and St. Paulinus of Nola. Moral of the story: if you want to live a life of heroic virtue, hang out with a bunch of saints.

4. He wrote one of Western Civilization’s first autobiographies.

St. Augustine’s Confessions is part spiritual autobiography, part theological and philosophical work, and part love-poem to God. However you categorize it, it’s a classic. If you read only one Christian book in your lifetime (not counting the Bible), read this one. Be warned, it’s not light reading.

“You stir man to take pleasure in praising you, because you have made us for yourself, and our heart is restless until it rests in you.” 3

If you’re reading this the same day this article was published, then that’s today. If you attend Mass or Liturgy of the Hours, you might hear prayers that mention him. His mom’s feast day is the day before (St. Monica, August 27).

6. He was one of the first four Doctors of the Church.

Along with St. Jerome, St. Ambrose, and St. Gregory the Great, St. Augustine was one of the first four saints given this title. “Doctor,” a Latin word meaning teacher, is used to show that these saints did unparalleled work to teach and defend the Catholic Faith. Today, there are 36 Doctors of the Church. 5

7. He actually did father an illegitimate child during his crazy years.

I promise, I wasn’t just making that up. After Augustine renounced his old way of life, his son Adeodatus converted and was baptized with him in Milan.

8. And that weird religious sect he used to be a part of? Well, he basically destroyed them.

After his conversion to Christianity, St. Augustine dedicated a fair bit of his writing to philosophically and theologically demolishing the Manicheans. 6 Did he succeed, you ask? Well, let me respond by asking you this: have you ever met a Manichean? No? Exactly.

9. He wrote a rule for monks that’s still used today. 7

In St. Augustine’s time, monasticism was the hottest new trend in the Roman Empire. Augustine himself was part of a monastic community, and the rule that he wrote was borrowed by a lot of later religious orders such as the Dominicans and the Augustinians.