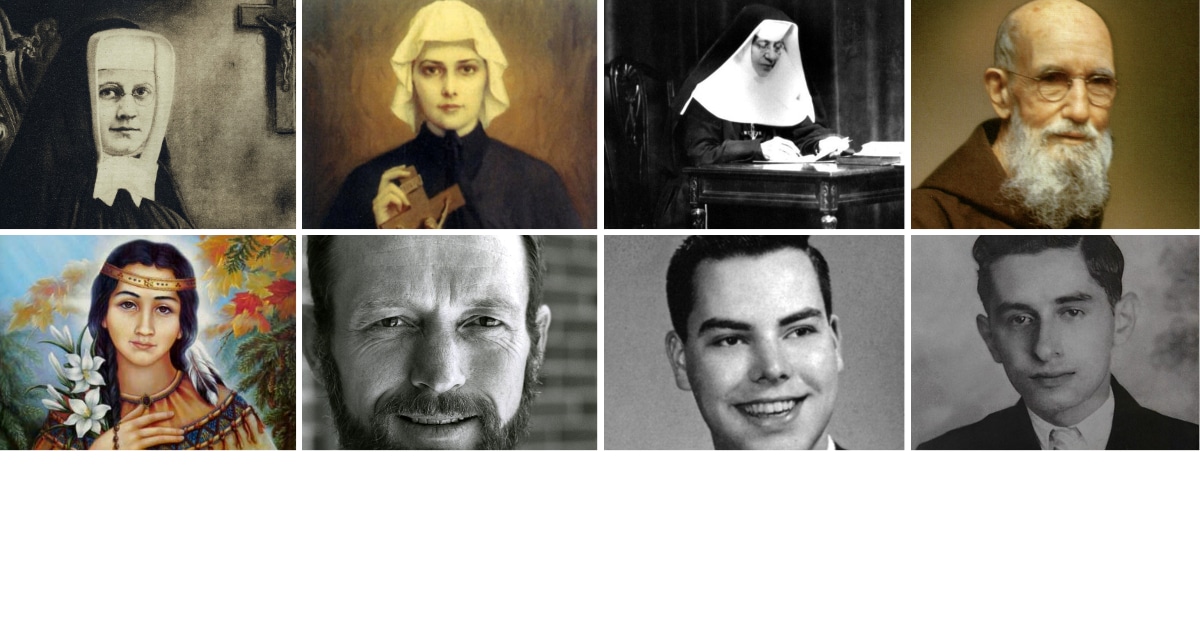 The Catholic Church has many incredible American saints. They have founded orders, served the poor, and lost their lives for their flocks.

Bl. Carlos grew up in a devout Catholic family. His sister joined the Carmelites and his brother became a Benedictine abbot. Bl. Carlos suffered from poor health throughout his whole life. This hurt his chances of becoming a priest and further studies. Despite the obstacles, he promoted a renewal of the liturgy in Puerto Rico. More Info

Bl. Miriam grew up in a family of Slovakian immigrants. After finishing high school, she desired to join the Carmelites. Various interruptions kept her from entering religious life. This included her mother’s illness, university studies, and even her own illnesses. After awhile, she joined a teaching order: the Sisters of Charity of St. Elizabeth. Before she could receive permanent vows, she fell ill to appendicitis. She died two days after her operation. More Info

Bl. Solanus Casey grew up in Wisconsin as one of sixteen children. He tried to become a priest, but his classes were in German and Latin. His struggles with languages led to him joining the Order of Friars Minor Capuchin to improve his chances. There he would become a “simplex” priest, meaning he could not preach or hear confessions. While serving as the doorkeeper for decades, many knew him for his wisdom and miracles. He had a deep compassion and love for those in need. More Info

Bl. James grew up in a small town in Wisconsin. As a freshman in high school, he met and joined the De La Salle Brothers. He began his work teaching English and Spanish at a high school in St. Paul, Minnesota. His superiors sent him to teach in Nicaragua. After ten years, political tensions rose in Nicaragua. To protect his safety, his superiors ordered him home. He longed to return and after two years he taught in Guatemala. A little over a year later, three hooded and masked men shot and killed him. Bl. Stanley Rother was also assassinated in Guatemala five months earlier. More Info

Bl. Stanley was born in a small town in Oklahoma, to a farming family. After high school, he went to seminary and became a priest. He served in various Oklahoma cities, including Durant, Tulsa, and Oklahoma City. In 1968, he asked to serve the Tz’utujil people in rural southwest Guatemala. He worked hard to learn Spanish and Tz’utujil. He even translated the New Testament in the local language. As political unrest grew, Bl. Stanley made it onto a death list in Guatemala. He returned to Oklahoma by order of his bishop. After a few months, he convinced his bishop to let him return. On July 28th, 1981 gunmen broke into the rectory and shot him in the head twice. On December 1st, 2016 Pope Francis confirmed that he died “in odium fidei,” or “in hatred of the faith.” More Info

Born in New York City, St. Elizabeth Ann Seton was the first American born canonized saint. She first grew up in the Episcopal Church. She married William Seton and had five children. After her husband died in 1803, her husband’s Italian business partners introduced her to Catholicism. She became Catholic in 1805 at a time when Catholicism had little influence in the United States. The Sulpicians had escaped the Reign of Terror in France and invited St. Elizabeth to move to Maryland to start a Catholic school for girls. She also founded the first religious congregation in the United States and the first free Catholic school. This marked the beginning of the parochial school system in America. More Info

St. Kateri is the earliest American saint. Her mother converted to Catholicism after contact with French missionaries. The Mohawk tribe captured her and assimilated her into their tribe. She married St. Kateri’s father, a Mohawk chief named Kenneronkwa. While she was around four, smallpox killed both of her parents and her baby brother. Her community faced constant conflict with the French for most of her life. At the age of 18, she met the Jesuit priest Jacques de Lamberville who instructed her in the Catechism. She converted to Catholicism at 19, taking the name “Kateri” in honor of St. Catherine of Siena. She practiced acts of mortification and charity, becoming a perpetual virgin. During Holy Week in 1680, her friends noticed that her health was failing. She received Last Rites. Her last words were “Jesus, Mary, I love you.” More Info