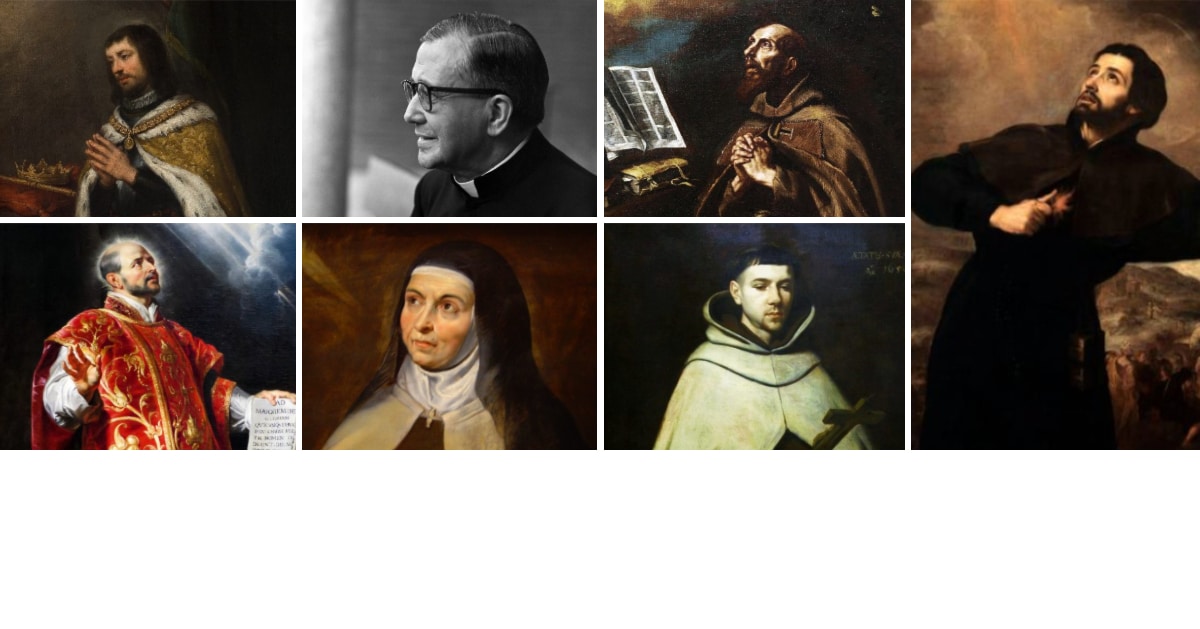 The Catholic Church has many incredible Spanish saints. They have founded orders, converted many to Christ, and taught the Church how to pray.

A member of the Dominicans, St. Vincent preached and converted for over 20 years in Europe. He contributed to the resolution of the Western Schism, where 3 separate men claimed to be Pope. The division in the Church even led him to physical sickness. Due to his fiery preaching, his nickname is “The Angel of the Last Judgment.” More Info

St. Josemaría founded and expanded the personal prelature Opus Dei. He taught that everyone has a call to holiness and that ordinary work and life can sanctify us. Millions have read his writings and Opus Dei has spread all over the world. More Info

St. John preached throughout Andalusia in southern Spain. He was even jailed for preaching against the wealth of the aristocracy. He and his disciples founded many schools and universities. His influence and support allowed for the Jesuits to spread and grow in Spain. The Catholic Church considers St. John of Ávila a Doctor of the Church. More Info

Born to nobility and wealth, St. Peter joined the Franciscans at the age of 16. A man of deep piety, he went around Spain founding communities and preaching the Gospel. St. Peter helped St. Teresa of Ávila begin her work of reforming the Carmelite Order. On his deathbed, he refused a glass of water saying, “Even my Lord Jesus Christ thirsted on the Cross.” While he on his knees in prayer, he died. More Info

St. Francis was born to nobility and wealth, married, and had 8 children. After the death of his wife, he renounced his titles and became a Jesuit priest. He helped found the famous Gregorian University in Rome. After working in Spain and the New World, he became the third Superior General of the Jesuits. Despite his power and influence, prayer and holiness were always his first priorities. More Info

While in college, the doorkeeper St. Alphonsus Rodriguez felt that St. Peter had a call to serve in the New World. As a Jesuit, St. Peter volunteered to go. His immediate ministry was to help slaves arriving from Africa. Even on the day they arrived, St. Peter would board the ship and care for the slaves. During his 40 years of work, he baptized an estimated 300,000 slaves. More Info

As a deacon in Rome, St. Lawrence distributed the wealth and the treasures of the Church. The Emperor Valerian demanded he turned them over. After 3 days, St. Lawrence brought many of the poor, sick, and suffering of the city. He told the prefect of Rome that this was the Church’s treasure. The prefect had him burned on a gridiron. Legend has it that while burning, he told them “I’m well done on this side, turn me over!” More Info

After joining the Carmelites, St. John considered joining the more strict Carthusian order. While traveling, he met St. Teresa of Ávila. She told him about her reforms to the Carmelites and convinced him to delay his decision. He joined her as she founded convents throughout Spain. Later, he even became her and all her nuns’ spiritual director and confessor. A group of Carmelites opposed to his reforms kidnapped him and imprisoned him. He is a Doctor of the Church and specializes in teaching about the spiritual life. More Info

He served as king in many parts of modern day Spain. St. Ferdinand led major efforts to reclaim parts of Southern Spain. Even as a king, he spent many nights in prayer and fasting, especially during war time. He founded many churches, dioceses, and universities as well. St. Ferdinand’s prioritized spreading of the Catholic faith and reclaiming Spain. More Info

St. Francis was a normal college student at the University of Paris. This changed when he met his new roommate St. Ignatius of Loyola. His other roommate was St. Peter Faber. Together, they founded the Society of Jesus, or the Jesuits. He was the first missionary for the Jesuits, evangelizing all across Asia. His hand grew weary because of the many thousands of people he baptized. More Info

After joining the Canons Regular, St. Dominic felt a call evangelize and teach. He felt called to found the Order of Preachers, or the Dominicans. This new group allowed for more flexibility than either monks or secular priests. For centuries, the Dominicans have evangelized and preached all across the world. Their most famous theologian and writer is St. Thomas Aquinas. More Info

Beginning as a soldier, he endured a cannonball to the leg. While healing, St. Ignatius began reading the lives of the saints. They inspired him and he dedicated his life to God. He tried his best to preach, but the Church wanted him to study theology first. At the University of Paris, he met St. Francis Xavier and St. Peter Faber. St. Ignatius inspired them and a few other men to form the Society of Jesus, or the Jesuits. He is famous for his Spiritual Exercises which help with prayer and discernment. More Info

St. Teresa grew up in a devout family, entering the Carmelites at 18. She realized that her sisters were not strict enough in their spiritual duties. After meeting with St. Peter of Alcantara, she began reforming the Carmelites. Despite much opposition, she created her own convent. She created a constitution that went back to the order’s original rule. Five years later, she began creating new convents across Spain. She had special help from her friend, St. John of the Cross. St. Teresa experienced many mystical experiences from God in prayer. She is famous for her explanations on prayer, leading to her official title as a Doctor of the Church. Today, she is often known as the Doctor of Prayer. More Info