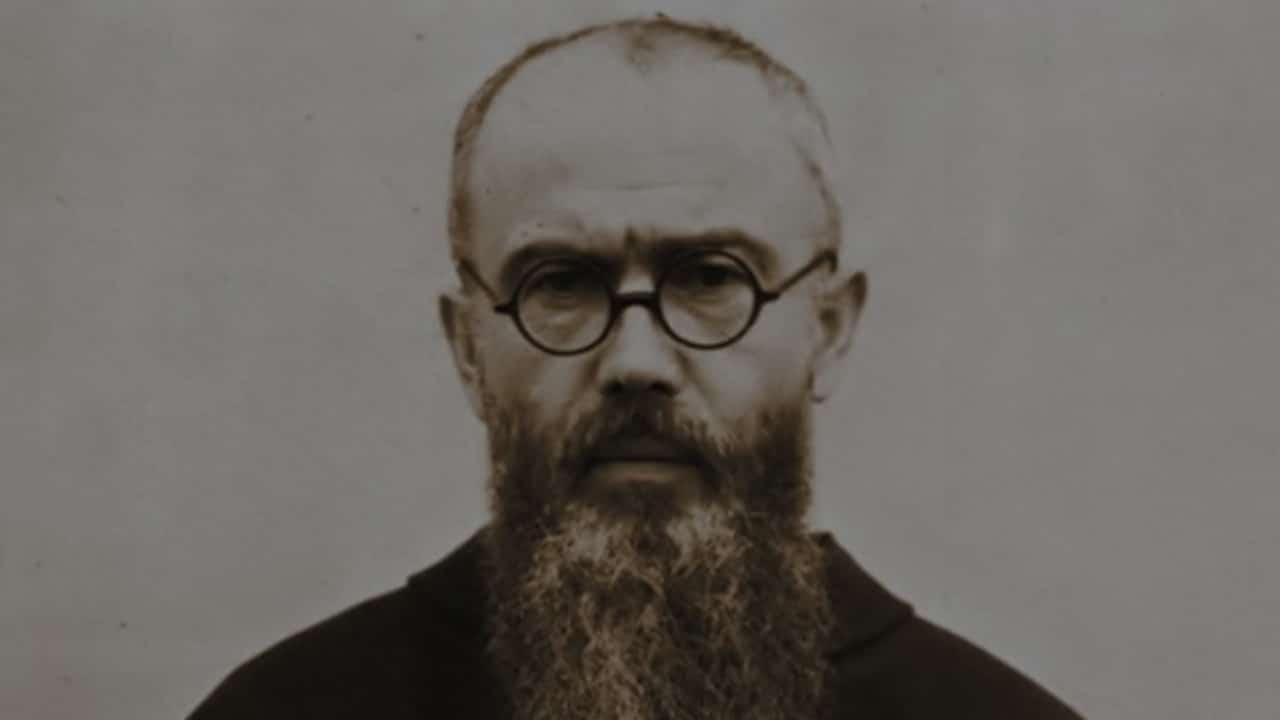 St. Maximilian Kolbe is the patron of the 20th century.

This Polish saint led a heroic life with the Conventual Franciscans. He dedicated himself to his brothers and to spreading devotion to Mary.

His life ended with a heroic act of charity at Auschwitz concentration camp.

St. Maximilian was born in Poland in 1894, then a part of the Russian Empire.

When he was 12, Mary appeared to him:

That night I asked the Mother of God what was to become of me. Then she came to me holding two crowns, one white, the other red. She asked me if I was willing to accept either of these crowns. The white one meant that I should persevere in purity and the red that I should become a martyr. I said that I would accept them both.

In 1907, he and his brother Francis joined the Conventual Franciscans.

He continued his studies in Rome, earning a doctorate both in philosophy and theology. In seminary, he also formed the Militia of the Immaculata. They would use every possible means to promote a total consecration to Mary.

After his ordination in 1918. St. Maximilian returned to Poland. He continued to promote devotion to Mary and also taught in Krakow’s seminary.

In 1922, he began publishing pamphlets and magazines about Mary. The operation grew so much that he founded a monastery in 1927 to help with all the publishing.

Between 1930 and 1933, St. Maximilian made a series of missionary journeys to Asia. He worked in China, Japan, and India. He founded a monastery in Nagasaki, Japan that still operates today.

He returned to Poland and stayed due to poor health. While overseeing the monastery’s works, he also founded a radio station.

At the outbreak of World War II, St. Maximilian was one of the few friars who remained at the monastery. The Nazis kept a close eye on him, as his monastery would publish anti-Nazi publications.

In 1941, the Gestapo closed his monastery and later sent him to Auschwitz. As a priest, he received brutal harassment and beatings.

One day, a prisoner escaped. The Nazis chose 10 prisoners to die of starvation to deter any more future escape attempts. One of the men, Franciszek Gajowniczek, cried out, “My wife! My children!”

While starving, St. Maximilian led the prisoners in prayer and comforted them. After 2 weeks without food and water, only St. Maximilian remained alive. The Nazis injected him with carbolic acid to clear out the bunker.

Pope St. Paul VI beatified him in 1971 and Pope St. John Paul II canonized him in 1982. During his canonization. the pope declared him as a “martyr of charity.”

The Militia Immaculata continue on today throughout the world. St. Maximilian Kolbe is the patron saint of families, prisoners, and the pro-life movement.